17th Century Farthings – The big changes to small change in the 1600s. 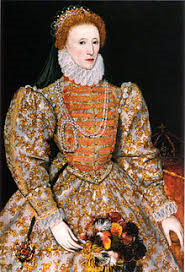 Elizabeth 1st was on the throne at the start of the 17th century. Coinage at this time in England was all silver. Whereas this is great for todays metal detectorists, it caused problems at the time. By the end of the 1500s, a farthings worth of silver was too small a piece of metal to make a useable coin from. Halfpennies were still being made, and also a coin valued at three farthings. With this you could buy something for a farthing, pay with your three farthing coin and get a halfpenny change. The previous method of cutting coins into halves and quarters had long been outlawed.

Elizabeth died in 1603, and as she didn’t have any children, James 6th of Scotland took over the English throne as James 1st of England.

James had been use to copper coinage in Scotland for the smaller denominations as well as silver and gold for the higher value coinage. James knew that the English wanted their coins to be actually worth what they were. Up until now, sterling silver at 92.5% silver was the usual metal to make English coins (£ sterling) from. At this time silver items like spoons could be melted down and made into coinage or coins could be melted down and made into spoons. A spoon weighing the same as 4 shillings was worth 4 shillings. There had been exceptions like when Henry 8th spent too much and put less silver in the coins for a while, which wasn’t at all popular. James 1st needed small change, but didn’t want to upset the English with coinage traded as a farthing but worth less than a farthing in metal. In 1613, James granted a licence to Lord Harrington to make Royal Farthing Tokens from copper. Some of these were tinned to look silvery, but as there wasn’t a farthings worth of metal in them, Lord Harrington could make a large profit, as did James for selling Lord Harrington the licence. Unfortunately, Lord Harrington died in 1614, and the licence was passed to the Duke of Lennox. Lennox made similar but slightly larger coins throughout the rest of James’s reign. 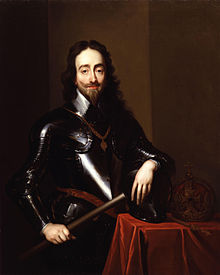 In 1625, Charles 1st came to the throne by which time, the Duke of Lennox had become the Duke of Richmond and died, but his wife took over the licence and made Richmond farthings, of a similar design.

In 1634, another licence to make farthings was granted to Lord Maltravers, who made similar farthings until 1636.

The token farthings of Harrington, Lennox, Richmond and Maltravers all look, on first glance, to be very similar, especially when they’ve been in the ground for nearly 400 years.

They can, where enough detail is seen, be identified thus, James 1st

Both types read IACO (short for IACOBVS – latin for James)

By now, the English had had over 20 years of these token coins, and apart from Royalty and the licence holders, other people had benefitted from making small tokens. Forgeries were commonplace as a forger could make 4 tokens and swap them for a silver penny, which was actually worth a penny!

So apart from the 4 main types, we may dig up, there will be contemporary forgeries as well. 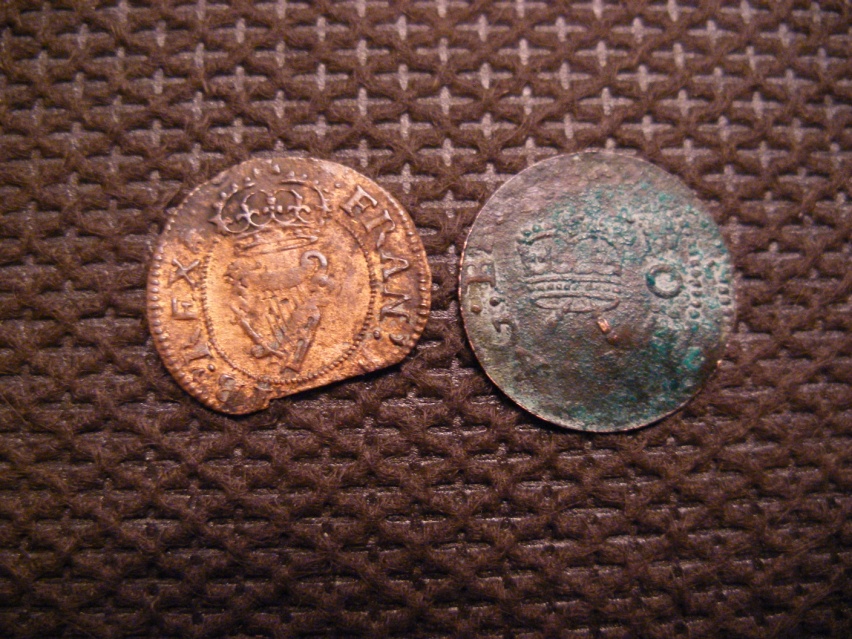 A Maltravers and a Richmond Farthing.

In 1636, there was a new coin made by the mint. The Rose Farthing. These were copper coins with a brass wedge in them to deter forgery. Most of the ones we dig are so badly preserved that it is hard to see the brass wedge. Also, quite a few are forgeries, without a brass wedge. I suppose that if you were passed a coin that you knew wasn’t worth what it should be, it didn’t really matter if it was real or fake, as neither was actually worth a farthing. These coins are often found and have a rose on one side and a crown on the other. They were made until 1644 and there were 3 main types, but all very similar. 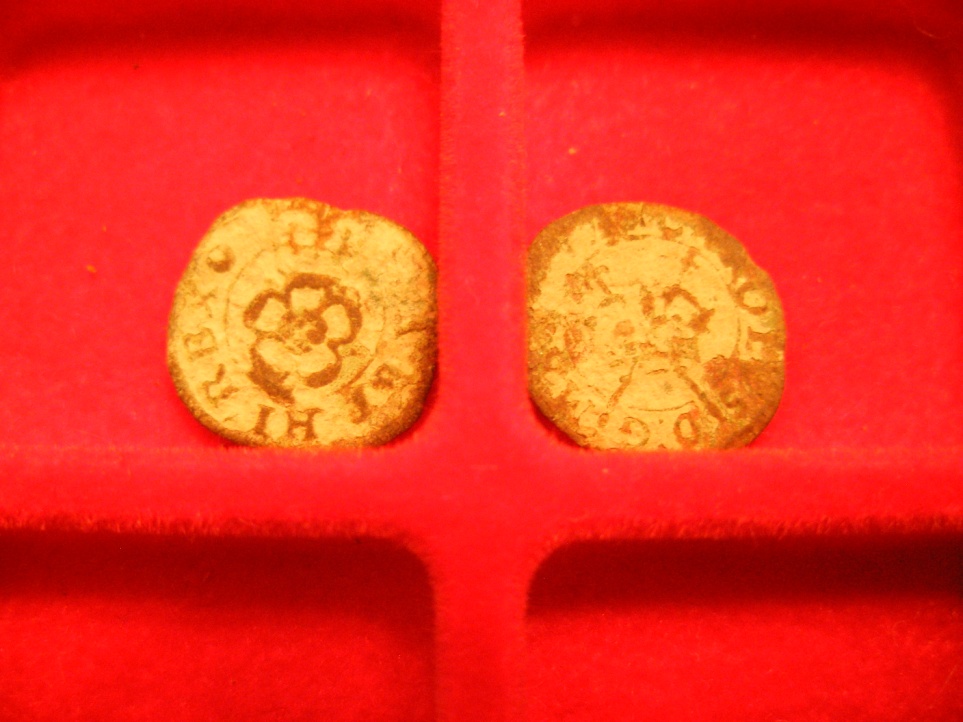 The next time that the official mint, under the direction of the monarchy, produced a farthing was in 1672. (A slight exception to this came in about 1657 when Oliver Cromwell issued a copper farthing for ‘Charitie and Change’ but real ones of these are extremely rare). So for 28 years, hardly any new small change was made. Not only were there no official farthings, but the half pennies production stopped during the Commonwealth (1649-1660).

Instead, to facilitate trade, local traders made their own tokens. From about 1652 to the late 1660s, a blind eye was turned to this by the authorities. Some very interesting tokens can be found issued by Towns such as the Bristol farthing, or pubs, such as the Red Lion in Thame. Other tokens are found issued by hatters, candle makers, etc. These tokens often show 3 letters on them in a triangle shape. The top letter is the first letter of the issuers surname, with the first initial of the man, followed by his wifes first initial below. Unmarried issuers are often seen with just the two initials. Some tokens have pictures representing their trade such as a candle, a hat or more often the mercers mark, which looks like a heraldic shield. 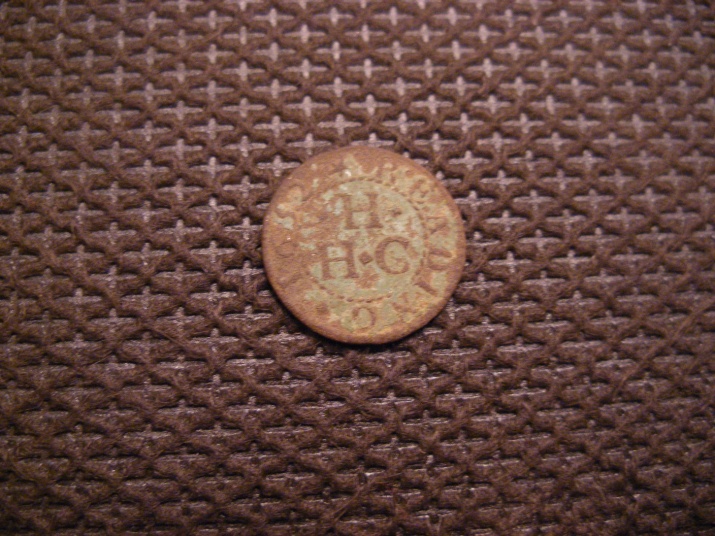 A Henry Head Reading Farthing of 1652

Some farthings were made square or even rarer in a heart shape, but the vast majority were round. 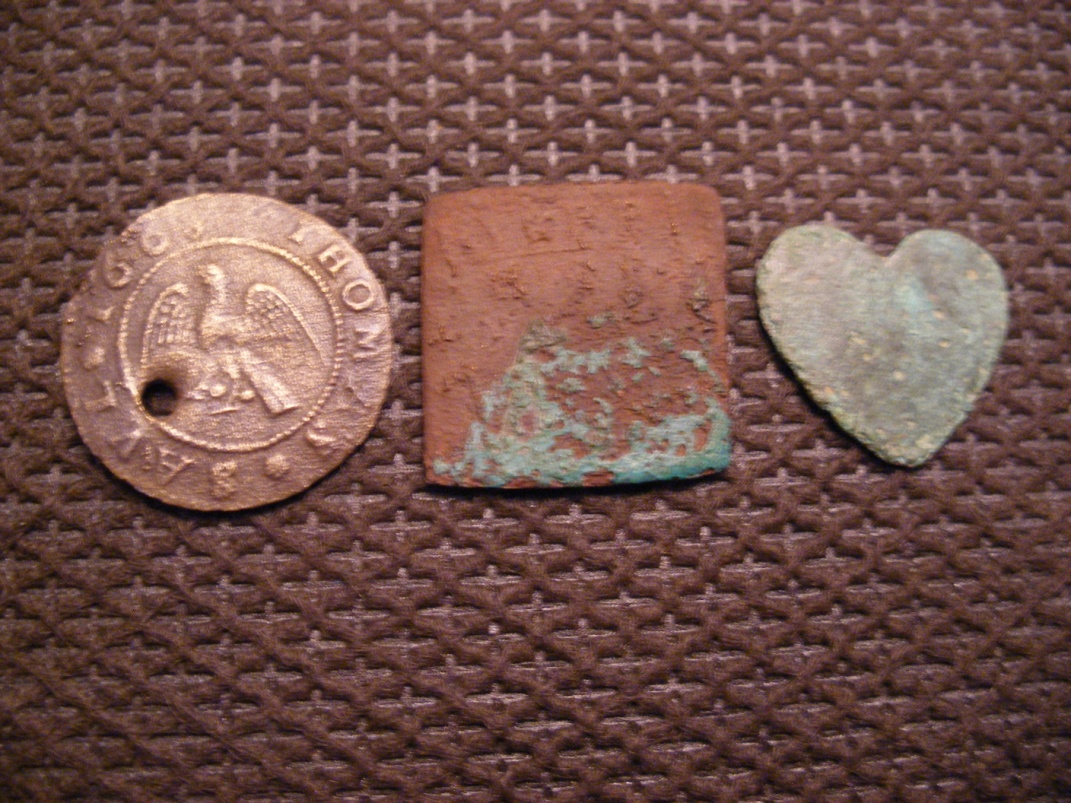 In 1672, the newly designed farthings with Britannia on the reverse were issued. These stayed in use for about the next 300 years. The halfpenny was now also made to help ease low value trade. The coins were now made with an almost fair amount of copper, that is, the farthing was made with nearly a farthings worth of copper. Forgeries were still made, but much less profit was to be had. 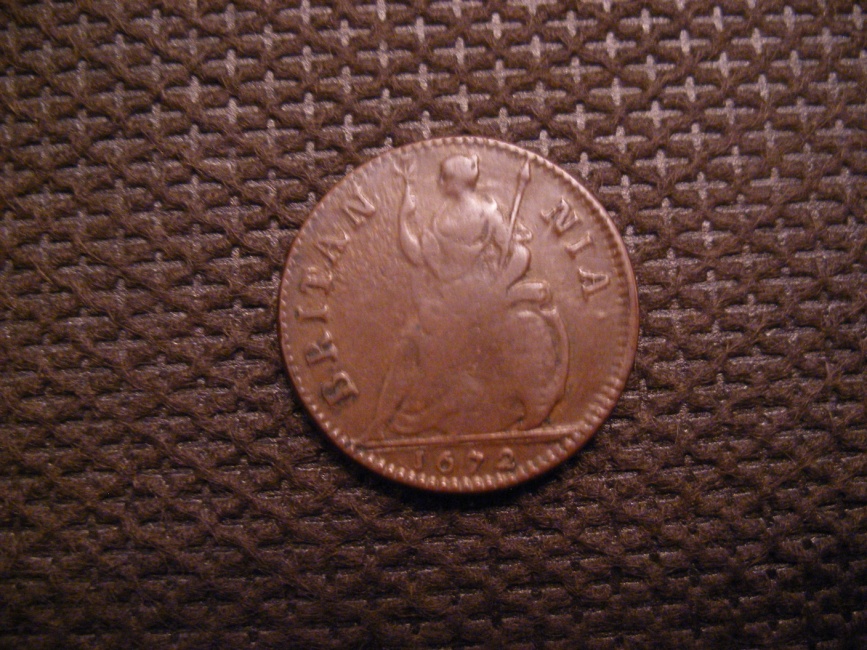 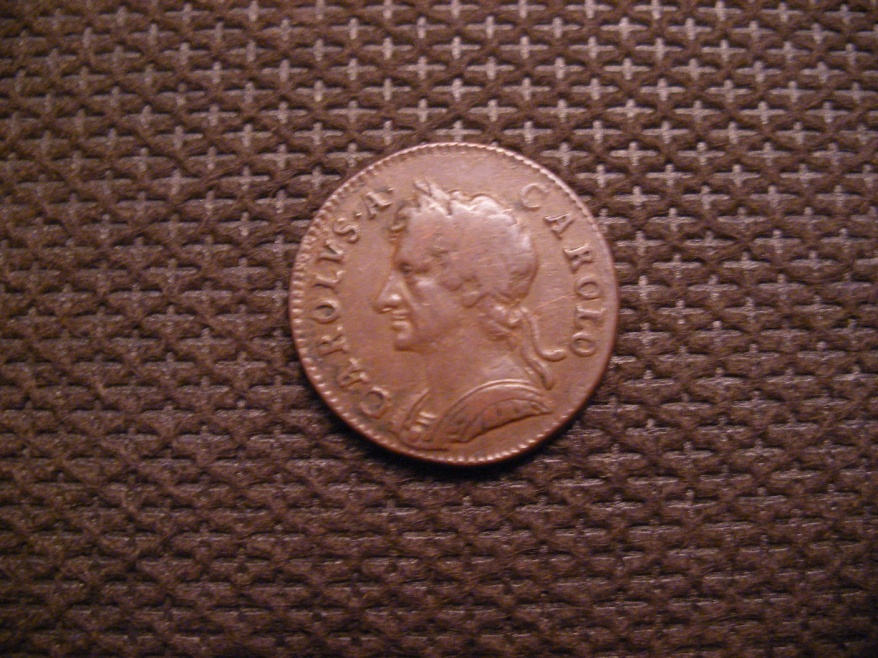 In order to try to stop any forgeries being made, and also to try to help a struggling tin mining industry in Cornwall, the next development in 1684 was the tin farthing. The same Britannia design was used. These had a square copper plug in the centre to try to stop them being easily forged. They weren’t popular as tin was cheap so again the public felt that they were using coins not worth their face value. The issuing authorities made a nice profit though. The other problem is that they dissolved a bit when wet and made a mess in peoples’ pockets. Another issue is that copper reacts with tin, which makes the copper plug come loose and fall out so they are often found with a hole in. 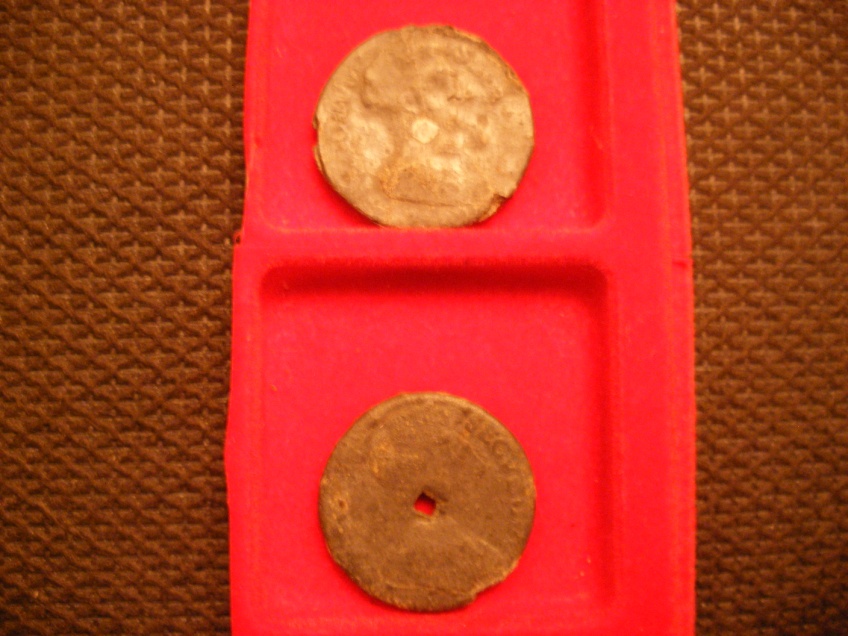 Tin Farthings, the lower one has lost its copper plug

In 1694, large amounts of copper farthings and halfpennies were produced. This started a stable period of farthing and halfpenny production in copper which lasted until 1775, but that’s another story. 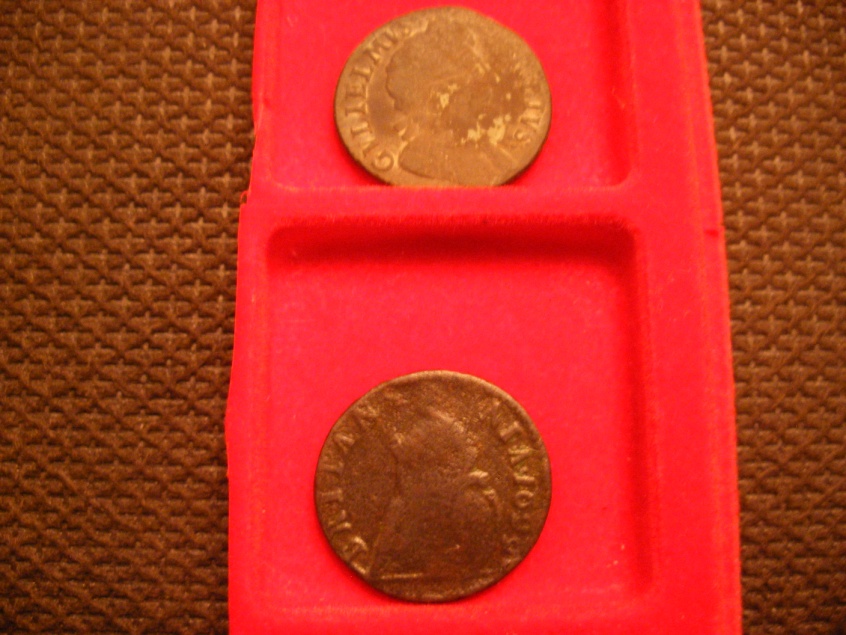 Back to top
Go to bottom
We use cookies

We use cookies on our website. Some of them are essential for the operation of the site, while others help us to improve this site and the user experience (tracking cookies). You can decide for yourself whether you want to allow cookies or not. Please note that if you reject them, you may not be able to use all the functionalities of the site.